Play in the mind for an elusive edge

Does mental imagery influence or impact sports performance? Yes! It does when applied with diligence and self awareness. Southern Games comes up on April 9 - 10. This is the first big meet of a jammed pack season. As a former competitor and coach of Abilene Wildcats, my athletes and I, apart from physical preparation, employed the art of visualisation.  We ran our race in our mind over and over before the actual event. The Abilenian athletes of the sixties routinely use the visualization process as part of training and competition. We focused on the scene, the competition, the lane assignment, what time to hit at a given point in the race, weather conditions, track condition, wet, hard, parched with cracks on the surface, the finish line, the turn, the back stretch, the spike length for track con ditions, the starter, fast gun, long set position, who is in what lane, the location of the finish line, no party time, no shake hands before the race, professional attitude on and off the field.

There are many stories of athletes who have used these observations to cultivate not only a competitive edge, but also to create renewed mental state of environmental and self awareness, a heightened sense of well-being and confidence. All of these factors have been shown to contribute to success in athletics. The visualisation process has been clled guided imagery, mental rehearsal, meditation, and a variety of other psychologically related terms. No matter the term, the basic techniques and concepts are the same. Generally speaking, visualisation is the process of creating a mental image or intention of what you want to happen. An athlete can use this technique to determine an outcome for the race or training session. He/she can simply divorce him/herself from the madding crowd in a relaxed yet aggressive mode of competition fever. The athlete may choose to imagine a symphony of images of a previous race or a future desired outcome.

The athlete can simply ‘step into’ a hypnotic feeling and try to imagine in detail the way he/she wants to perform. In 1958, at the now defunct West Indian championships held in Jamaica, I ran the race over and over in my mind to minuscule detail; I practiced my launch for the tape to win the race. Low and behold the race came down to the launch. I won in record time from the outside lane exactly as I rehearsed.
I rehearsed this scenario with team mate Joe Goddard. He ran third in the race. He and Hendrickson Harewood caught me “early o’clock”, but I came off the turn like my idol Andy Stanfield of the USA. The race was over as I prayed for an early tape arrival. I won! There was visual imaging, the body felt good, there was the roar of the crowd. Using the mind, I summoned these images to appear over and over, enhancing this skill through repetitions or rehearsals, similar to physical practice. With mental rehearsals the mind and body become one when trained to actually perform the skill imagined.

Research has found that both physical and psychological reactions in certain situations can be improved with visualisation. Such repeated imagery can build both experience, confidence and perfection in an athlete’s ability to perform certain skills under pressure, or in a variety of possible situations. The level of concentration employed the week before Southern Games in 1965, and the power of meditation on the day of the 200 meters international was perhaps the most effective visualisation technique I used in Trinidad. I won the race in the last stride. I became the first T&T athlete trained at home to run 20.7 seconds, the fastest time in the world that year at that time. The result was a very extraordinary sporting experience in which I had complete control over a successful performance and a belief in ‘self’. Guided imagery, visualization, mental rehearsal or other such techniques can maximize the efficiency and effectiveness of your training. In a world where sports performance and success is measured in seconds, most athletes will use every possible training technique at hand. Visualisation might be one way to gain that very elusive competitive edge. 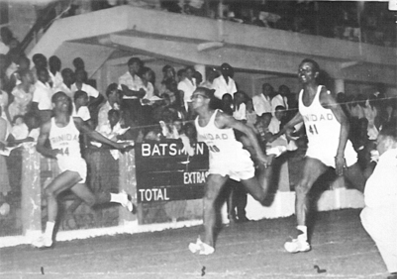 Imagine your life the way you want it to be...